Truck Driver Deaths Account for 25% of All Fatal Work Injuries

Some 745 U.S. truck drivers died on the job in 2015, more than any other occupation, according to the 2015 Census of Fatal Occupational Injuries, published by the U.S. Department of Labor, Bureau of Statistics.

Truck driver deaths that year accounted for more than 25 percent of all fatal work injuries.

Driving a semi-truck has historically been a highly dangerous occupation and data indicates the outlook remains bleak.

Truck drivers occupied the No. 1 spot on a 1995 Bureau of Labor Statistics report of occupations with the most fatalities. Other high fatality rate jobs at that time included farming, construction laborers, electricians, police, cashiers, airline pilots, timber cutters, carpenters, roofers and auto mechanics.

In that same report, truck drivers also led the pack in the number of injuries and illnesses with days away from work to recuperate. The primary reason: overexertion.

Across the board, traffic fatalities have skyrocketed, even though more safety technologies exist than ever before.

Airbags, electronic stability control and automated emergency braking systems can provide additional safety measures, but an improving economy and cheap gas prices have resulted in more motorists on the road.

Many experts suspect the most likely explanation for the surge in traffic deaths is smart phones, but “how the proliferation of smart phones ties into traffic fatalities remains unknown,” according to Car and Driver.

The publication points out that “law enforcement often lacks the technical resources and expertise needed to investigate smartphone use in crashes, and state-by-state differences in how crash information is collected can complicate attempts at the federal level to pinpoint the role of smartphones in the death spike.” 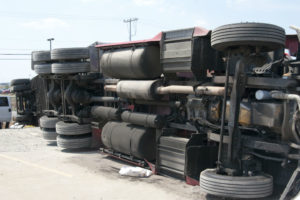 Higher accident and truck driver death rates can in part be attributed to the increased consumer demand for fast delivery of goods, a trend that has also upped the number of truck drivers on the roads, according to industry website Trucks.com.

“Because of the way drivers’ compensation is structured, they’re often asked to choose between productivity and safety, a tug of war that leads some to keep driving when they should be taking a rest break, economic sociologist and author Steve Viscelli told the website.

Compounding the problem are “long hours, low pay and tough working conditions,” contributing to an annual turnover rate hovering around 100 percent, resulting in perpetually inexperienced drivers on the road.

Another industry official cited a lack of federal standards for crashworthiness of heavy-duty trucks as a factor in truck driver fatality rates, pointing out that “they aren’t even required to have air bags.”